WAIV® can operate in a variety of climates, including humid areas. Its performance is directly correlated with the pan evaporation rate, which is determined by numerous parameters such as humidity, temperature, wind, solar radiation, and precipitation. The technology has been proven through previous project efforts in Israel, Mexico, and Australia, showing typical evaporation at least ten times (10x) the volume of evaporation ponds based on footprint area.

To demonstrate the capability of WAIV in the US, CCES developed a mobile, pilot-scale unit in collaboration with the technology’s inventors to test at sites across the country and to validate the sophisticated modeling that is used during the design process.

The pilot system consists of a soft-sided trailer and approximately 3,300 ft2 of evaporative surface area, just under 5% of a single full-sized WAIV unit.  Weather and performance data parameters are collected for each pilot test.  Evaporation from a WAIV system is directly proportional to evaporative surface area, so scale-up from a pilot system to a full system can be done with confidence.

As shown below, the pilot system has been tested in four different climates of the US so far, with very positive results at each location. 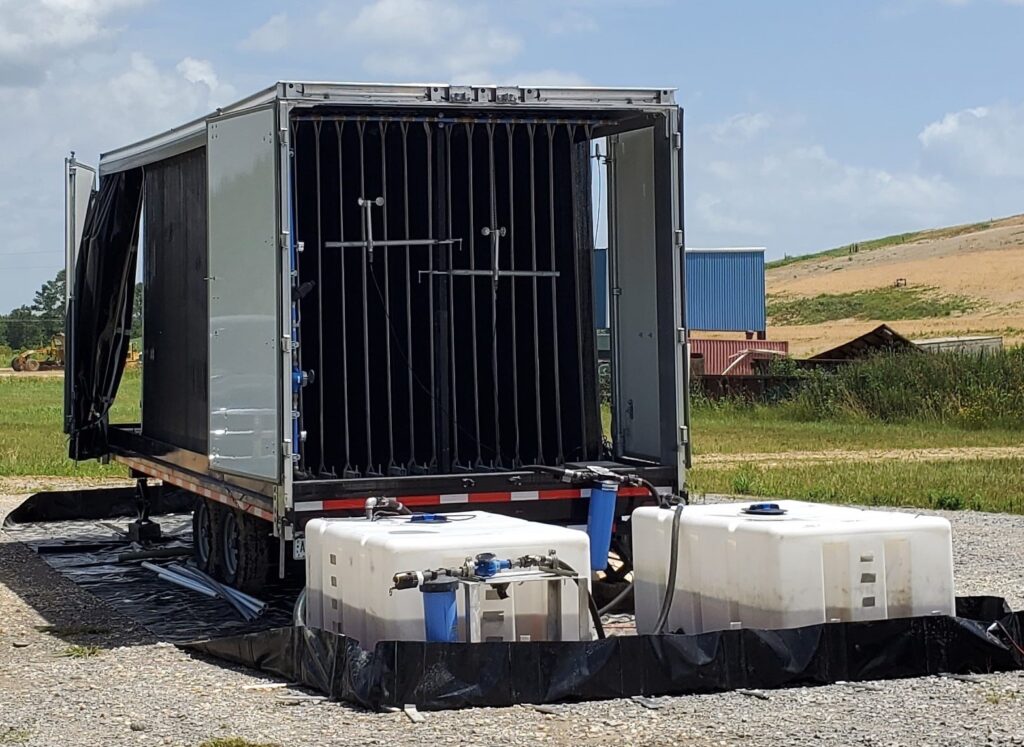 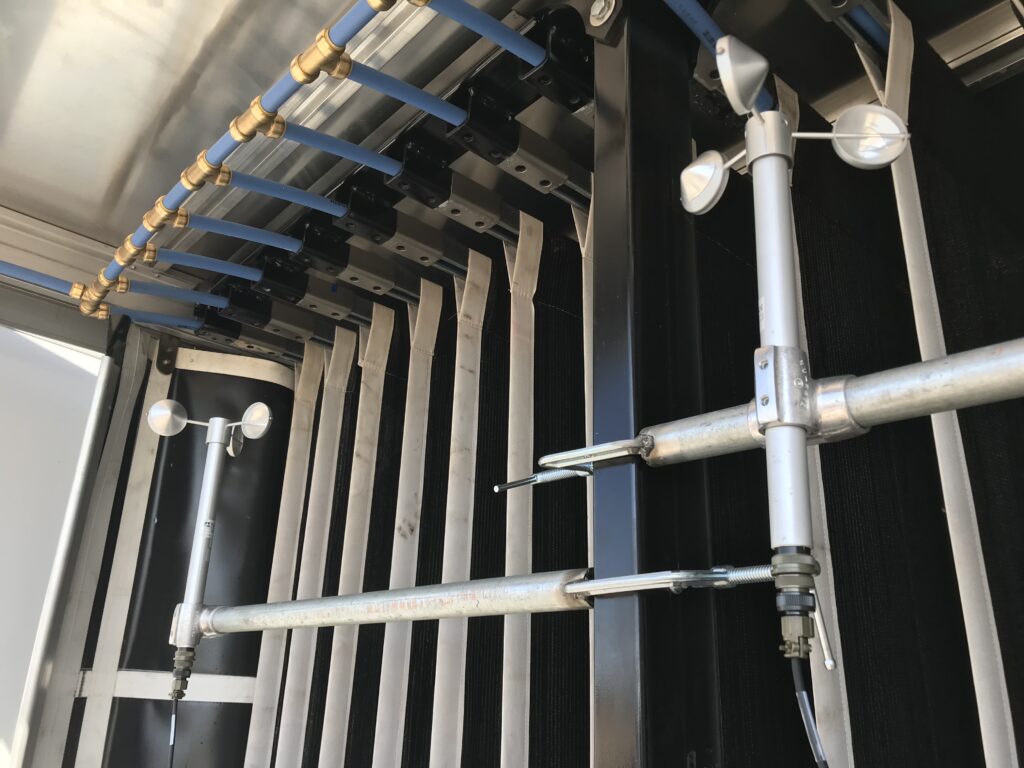 The pilot unit was first tested at the Bureau of Reclamation Brackish Groundwater National Desalination Research Facility (BGNDRF) in Alamogordo, New Mexico, in Spring and Summer 2020.  The actual evaporation closely correlated to the hourly wind speed and relative humidity, which are the key indicators used in our modeling process.  For evaporation results, the actual rate was 99.4% of the modeled rate! 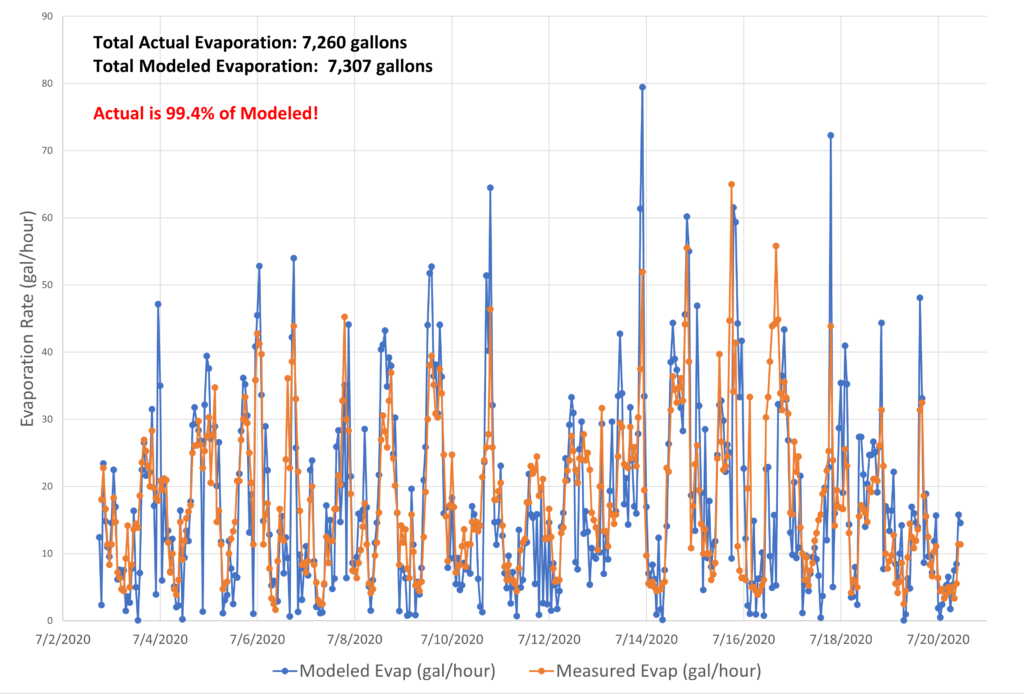 In late Summer 2020, the pilot unit was mobilized to a landfill in central Louisiana to evaluate its performance in the humid Gulf Coast region.  In August 2020, the unit was in the direct path of Hurricane Laura, but only sustained very minor damage because the high winds were able to whip through the trailer unobstructed, although testing was delayed for a while until the region’s power was restored.  Despite the setbacks, the test was successful, and results show that actual evaporation rates were often almost identical to the modeled predictions on a day-to-day basis, which again validated the sophisticated modeling and performance of the WAIV technology.  Over the longer term, cumulative actual evaporation exceeded the modeled rate by >20%. 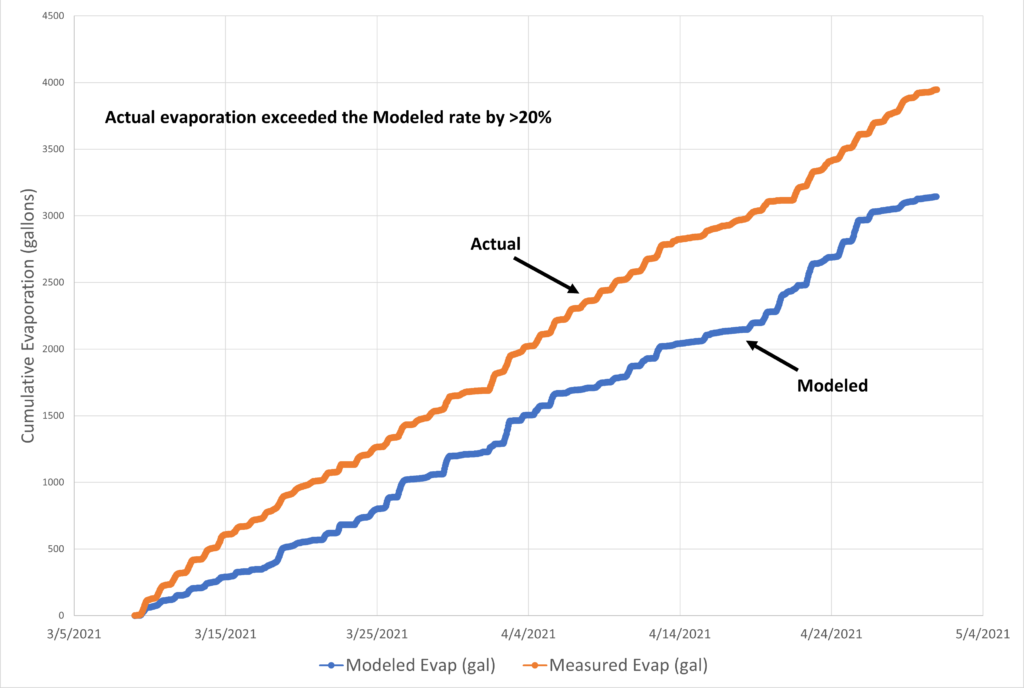 For the third test, one of the largest mining companies in the world was interested in the WAIV technology's performance with RO reject wastewater, so the mobile unit was transferred to one of their closed mine facilities in the Central Sierra region of California in late 2021.  The system operated well and results showed consistent trends between actual and modeled evaporation rates.  Additionally, the system's performance and volume reduction capability were tested with various electrical conductivity ranges, starting with 6,000 uS/cm and reaching nearly 40,000 uS/cm.  WAIV achieved a volume reduction of approximately 6.5x during the test, even despite the winter weather.  There was no observed scaling and only minimal clogging, which shows the robustness of the technology.  During full-scale operation, potential clogging or scaling would be addressed as part of the site-specific design components and simple O&M activities. 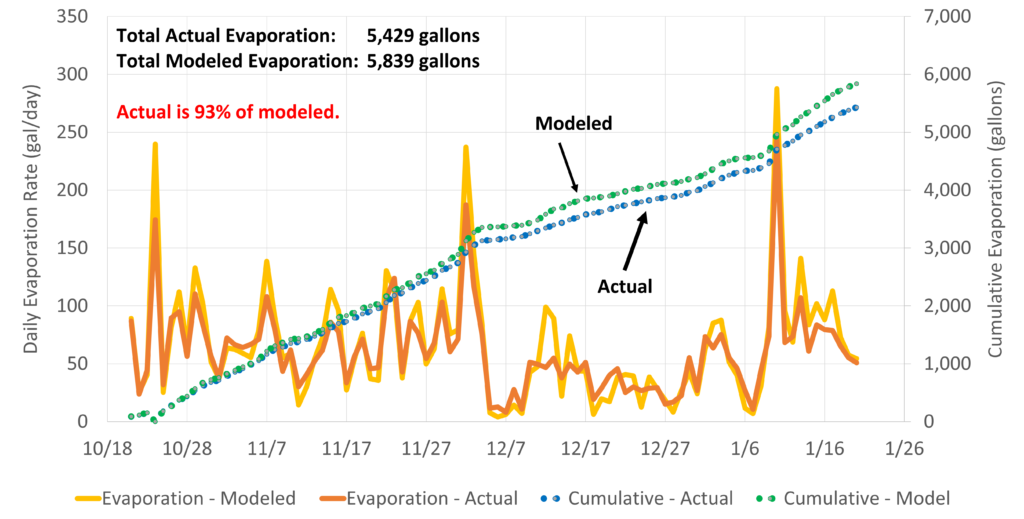 Pilot Test #4: Warm/Dry Summer in the Bay Area of California

The fourth test was at a landfill in the Bay Area of California for one of the leading solid waste companies in the country.  Once again, the modeling was validated and the actual evaporation rates were very consistent with the predictions (within 95% of the modeled rate) and resulted in significant volume reduction.  Site personnel were pleased with the ease of operation and stated that little effort was needed to run the system.  The system's performance with high-salinity wastewater was also tested, including extreme conditions with conductivity as high as 127,000 uS/cm.  The pilot system experienced very little to no fouling at those concentrations and it was able to operate continuously with only minimal maintenance required.  Again, full-scale systems are designed with site-specific considerations and any potential fouling or scaling would be handled through basic maintenance procedures. 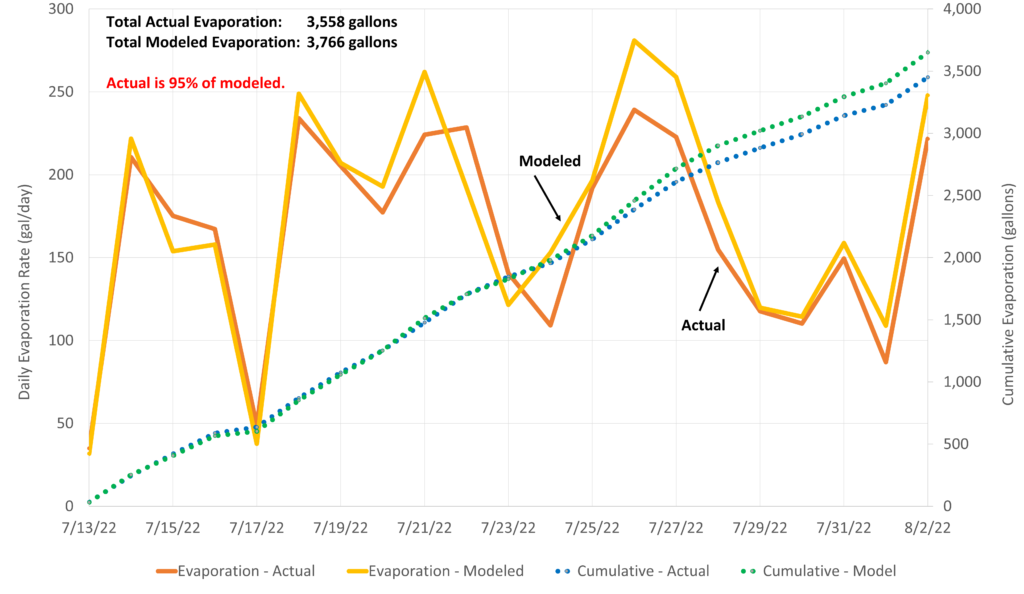